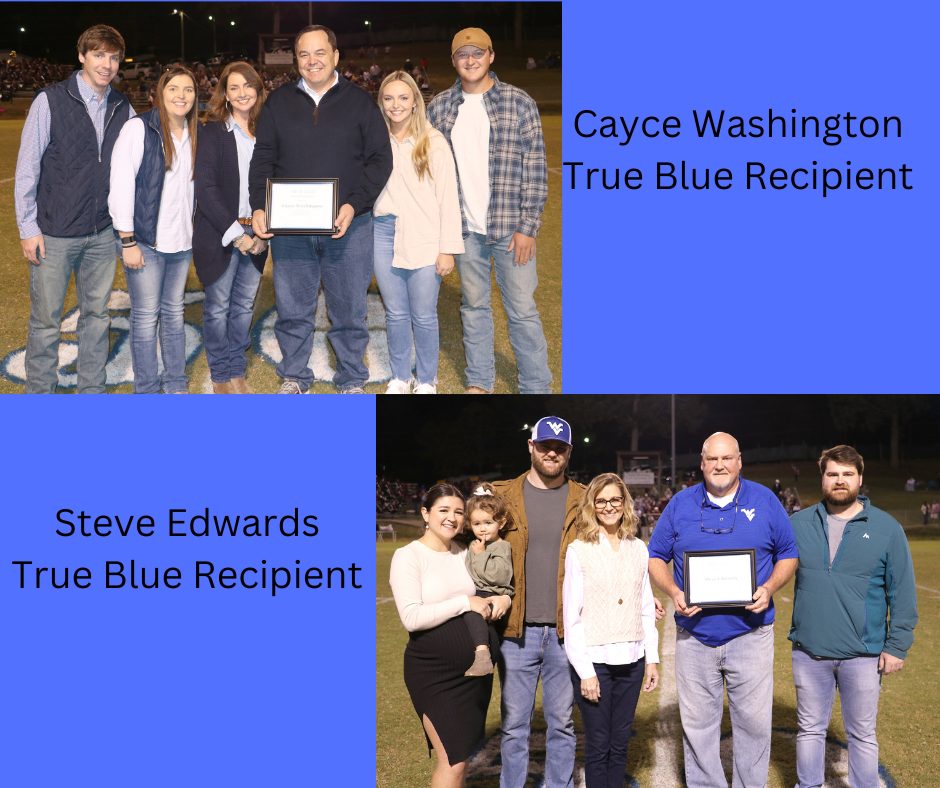 WATER VALLEY – Two longtime supporters of the Water Valley School District were recognized as “True Blue” recipients during halftime action Friday night. Cayce Washington and Dr. Steve Edwards were honored for going above and beyond the call for the betterment of the school district and its athletic department.

Washington is a 1990 graduate of Water Valley High School (WVHS). He served on the school board for 12 years and  has assisted with numerous athletic construction projects including the building of the Lady Devil softball field and upgrades to the Bobby Clark Field complex. Washington is an active supporter of all athletic and academic endeavors with the Water Valley School District. He is the owner of Valley Tool, Inc. and co-owner of WareHouse 72. He is currently President of the Yalobusha County Board of Supervisors.
On the field with Washington were his wife of 25 years, Michelle, who is a 1993 graduate of Water Valley High School; and his daughters, Mallory Mascolo and Carlye Washington, also both graduates of WVHS.

Dr. Steve Edwards is a 1980 graduate of WVHS. He was co-captain of Jerry Holt's 1979 Tri-Lakes Conference Championship football team and North Mississippi All-Stars. He was also a member of the 1979 North Half Championship baseball team. Dr. Edwards was a recipient of a football scholarship to Mississippi College, where he completed his undergraduate studies. He graduated from Southern College of Optometry in 1987 and began his career at Tri-Lakes Eye Clinic. He has been practicing optometry in Water Valley for 35 years. Dr. Edwards has been involved for decades with the Water Valley School District, athletics and the community. He has served on the school board, president of the football booster club and past president of both the Rotary and Lions clubs. He was appointed in 2015 by Governor Phil Bryant to serve on the Mississippi State Board of Optometry, and reappointed by Governor Tate Reeves.  He was recently awarded the 2022 Mississippi Optometric Association’s Optometrist of the Year Award.

As reported in the North Mississippi Herald published October 18, 2022.