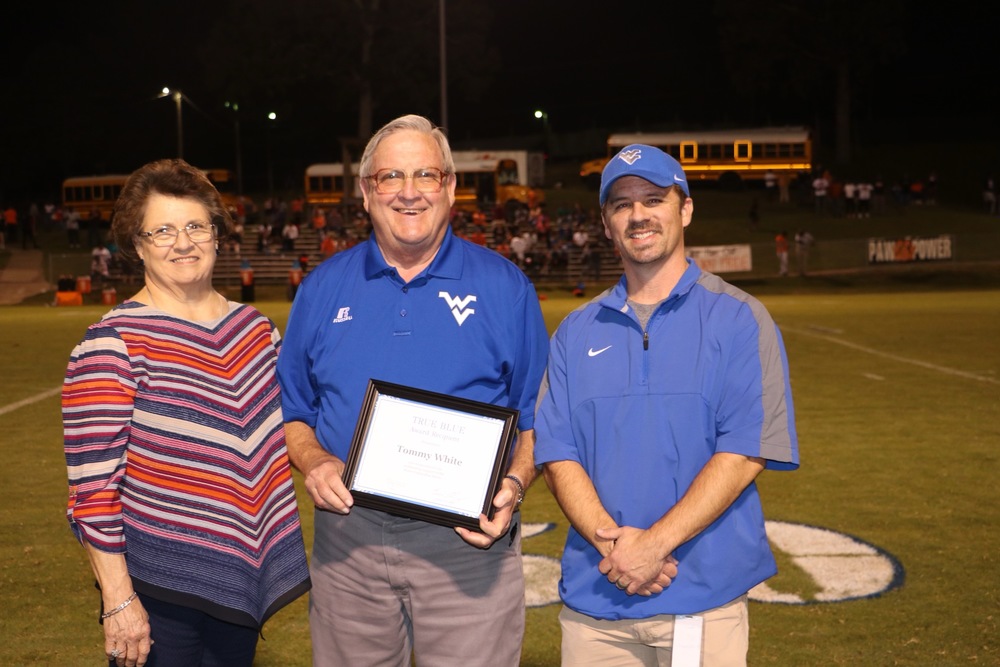 Community leader Tommy White was recognized as a “True Blue” recipient during Friday night’s halftime activities at Bobby Clark Field.  White graduated from Water Valley High School in 1964 and was involved in sports from the fifth through 12 grades. He played with the 1963 Chickasaw champion football team coached by Bobby Clark and Don Johnson.

White graduated from the University of Mississippi in 1969 and returned to Water Valley to work in his family’s petroleum business, C.W. White, Inc. White is a longtime team sponsor of the summer ball league. He is also a sponsor of the annual Water Valley High School football banquet, a tradition that was started by his late father, C.W. White, and other football players’ fathers in 1962. The longstanding tradition  includes providing a meal  recognizing the hard work and commitment from the coaches and players throughout the season. Football awards are also presented during the annual banquet. The motto for the annual banquet is “Win Eight, Eat Steak,” and if the team notches at least eight wins during the season, the players, coaches, cheerleaders and guests eat steaks. If the team wins less than eight games, hamburgers are served.

The “True Blue” certificate was presented by Water Valley High School Principal Drew Pitcock as White and his wife of 54 years, Linda Evans White, stood at the 50 yard-line.
To be recognized as a “True Blue” recipient means to have gone above and beyond the call for the betterment of the Water Valley School District and its athletic department. Different Blue Devil supporters are recognized each year for their dedication.

As appeared in the North MS Herald on September 22, 2022.  Credits to David Howell for article and photo.