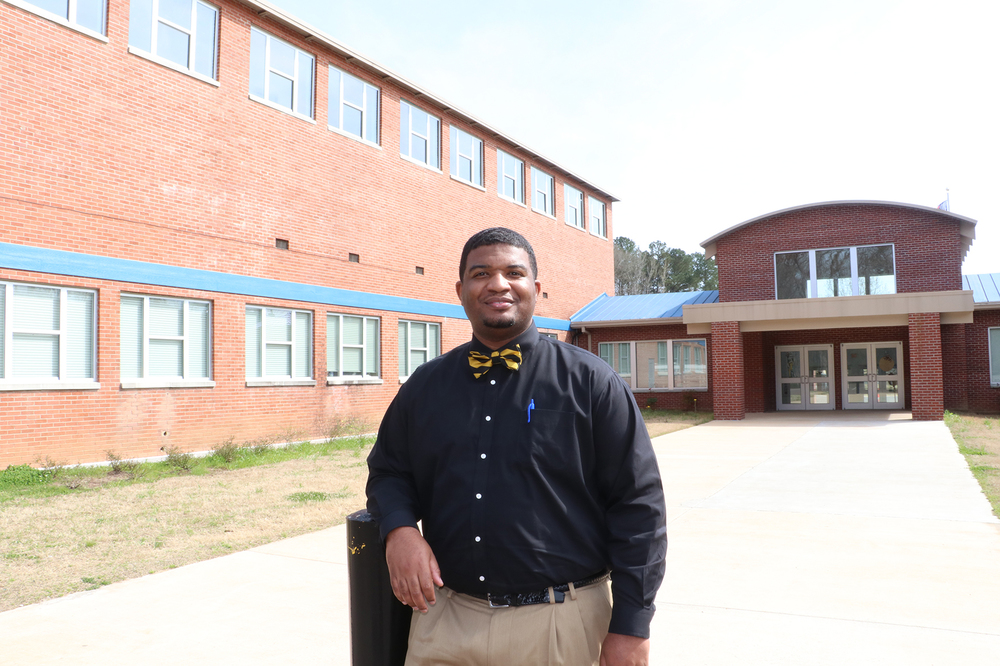 Watson, who is in his fourth year at DES, reported the decision to continue as the top administrator at the elementary school was an easy one after forging strong bonds with students and teachers.

“I can relate to the students here, I think that is why I have a good relationship with them,” the principal explained. “I grew up in a small town. I grew up in poverty and that is an issue for some of our kids.”

Watson strives to be a role model and mentor for his students, an outlook that dates back to his college years when he tutored and mentored kids through the Boys and Girls Club and AmeriCorps. He explained his passion to serve others was ingrained in him at an early age by his grandmother, also an educator.

“I remember when I had a classmate who was ill. My grandmother got us in the car and we had to knock on every door to take up donations. My grandmother and my mother instilled that in me, to show love to people and to be a servant,” Watson continued.

His commitment to the DES students is apparent as he recalls his time at the school.

“My first two years I had kids pulling on my coat-tail asking me if I was going to be back the next year. That is my goal, to not leave these kids. I will serve in any capacity to still be here to make sure this school moves to an A-rated school,” Watson stressed. “I am going to be here until my time is up.”

Watson said the tight-knit, family-oriented community is another strong factor for the school.

“Whenever we need something, people reach out trying to help this school – the teachers and students. They want to help us become an A-rated school. Businesses, parents, everybody plays a part and I think it is going to pay off,” Watson added.

Watson served three years as assistant principal at DES before he was tapped as interim principal this year. Much of his time at the school since early 2020 has been disrupted by Covid-19.

“Last year dealing with Covid was an every day occurrence. We had quarantines, we were always reaching out to parents, it was busy all the time,” the principal explained.

Although school days are almost back to normal, Watson said the emphasis this year is catching the students up. DES remains a D-rated school, a rating it has retained during Covid-19.

“I believe we have the right teachers in place. Our students are very smart. I feel like we have the potential to be an A school. We are going to get there, just in small strides. This year we have the ability to be a B,” he continued, also noting that the accountability model has not been finalized.

The focus in the weeks ahead is on final preparations for the students before state testing starts in mid-April. Students have completed the final case benchmarks and the data is being analyzed to determine where improvements can be made.

“We have 26 more days before testing starts. We are going to use those days to knock a dent in it,” Watson explained.

He also has input for parents.

“Make sure your children come to school every day and on time so they can get the best instruction from our teachers. We are rooting them on.”